50 Protesters Call on Supporters to Stop Giving Money to HRC 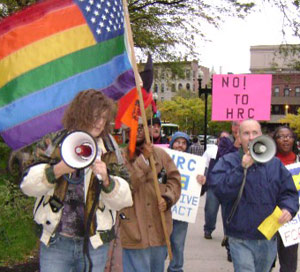 Campaign (HRC) Annual Dinner in Boston on October 25th. The protest was organized by the “blogavists” of QueerToday.com and supported by several area organizations including the local Transgender Veterans Association (TAVA). Queers Without Borders brought twelve spirited activists from Connecticut who provided bullhorns, signs, and logistical support.

Protesters marched and chanted outside the Sheraton, and several activists conducted “flyer drops” inside the event. “We’re ecstatic about the success of this protest,” said local organizer Trevor Wright, “We came out in solidarity to call on donors to give to local organizations instead of HRC.”

ENDA:
The protest was called in response to HRC’s support for a version of the Employment Non-Discrimination Act (ENDA) that did not include protections based on gender identity and expression, and their endorsements of conservative candidates over more progressive ones. Over 300 organizations including PFLAG and NGLTF continue to support the United ENDA document at unitedenda.org.

Nationwide Protests:
Protesters have been greeting HRC dinners for two years now. In New York City elected LGBT official boycotted the dinner. In San Francisco the keynote speaker, the may or of Los Angeles, declined to attend due to protests by queer organized labor activists. HRC has also been met by protesters in Washington D.C., and many other cities across the nation, including Kansas City. 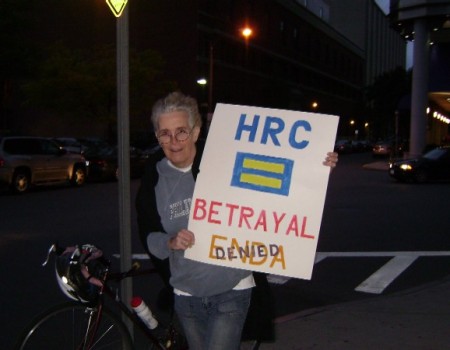 This entry was posted on Wednesday, October 29th, 2008 at 2:06 pm and is filed under Uncategorized. You can follow any responses to this entry through the RSS 2.0 feed. You can leave a response, or trackback from your own site.